During their stay, our fellows make all kinds of discoveries. Let’s see what Thomas Crisp, Assistant Professor at Georgia State University, found:

What did you discover?
A copy of Brundibár signed by both Tony Kushner and Maurice Sendak 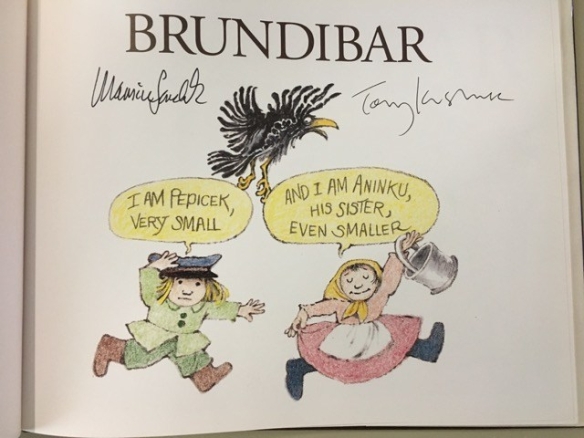 What should readers know about this item? Why is this item significant in children’s literature?
Kushner and Sendak created the picturebook version of Brundibár at the same time in which they were involved in staging a production of the opera (written by Hans Kráska) at the Chicago Opera Theater. Sendak, who was working on the designs for the opera, requested Kushner write an English-language adaptation of Adolf Hoffmeister’s libretto and, later, the text for this picturebook.

Kushner (2003) describes the history of the tale:

In 1938, the Czech Ministry of Education and Culture sponsored a competition for a children’s opera. I haven’t been able to find out whether Hans Kráska’s and Adolf Hoffmeister’s Brundibár won the competition, or whether it was excluded from the competition, or whether the competition was ever concluded. A few months after the opera was completed, the German army invaded and occupied Czechoslovakia, and Kráska, being Jewish, would have been barred from participation in such a contest, Jewish music unperformable before a general audience by Nazi race laws.

Brundibár was not given its premiere until 1942, at the Vinohrady, a Jewish boys’ orphanage, which had become a concert and recital hall for the Jews of the Prague ghetto. The piece was given three performances before the Nazis rounded up the opera’s designer, conductor, director, and accompanist, all the boys in the Vinohrady orphanage, and the composer, Hans Kráska. All were transported to the concentration camp at Terezin.

In September of 1943 this same group, all inmates of Terezin, staged a new, coed production of Brundibár using the camp’s imprisoned children. Kráska brilliantly orchestrated the piano score for a small ensemble, taking advantage of the fact that some of Czechoslovakia’s best musicians were prisoners in Terezin. The opera became a hit among the inmate population. Brundibár is a political allegory, an almost undisguised cry for resistance to Hitler. In photos of the production the boy playing the organ grinder Brundibár is wearing a mustache.

Brundibár was performed fifty-five times at Terezin. Jews sang it for Jews during the Freizeitgestaltung, or “free time period” the Nazis permitted the inmates of Terezin. Before long the camp officials recognized the opera’s propaganda potential. It was performed for the International Red Cross representative sent to inspect camp conditions, who went away impressed with the kindness of the Nazis and the cultured atmosphere of the camp. Segments of a performance were then filmed for inclusion in the Nazi-produced documentary, Der Führer schenkt den Juden eine Stadt (“The Fuhrer gives the Jews a City”).

Nearly all the children who performed it were eventually sent to Auschwitz, where they were murdered. Hans Kráska was killed there in October 1944. (p. 206-210)

Why is this item personally significant to you? 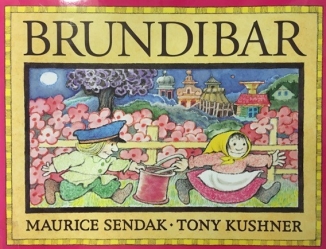 As a children’s literature researcher, I am an ardent admirer of the work of Maurice Sendak. Obviously, this hardly makes me unique: Sendak was the preeminent American children’s book artist of the 20th Century and was undoubtedly one of the greatest illustrators of all time (Schiller, David, & Marcus, 2013). In 1970, Sendak received the “Little Nobel Prize” of children’s literature, the Hans Christian Andersen Illustrator Award (Glistrup, 2002, p. 14). To date, Sendak is the only U.S. illustrator to receive the honor. Sendak’s books were an integral part of my childhood and, today, they make appearances in almost every course I teach. Before I began studying children’s literature, I studied theatre, where I was first introduced to the work of Tony Kushner. Kushner is an American playwright and screenwriter most widely known for his Pulitzer Prize-winning play, “Angels in America: A Gay Fantasia on National Themes.” As a queer-identified scholar, the fact that both these individuals also identify as gay males adds to the personal significance of their work for me. It was an unexpected surprise to open Brundibár, a book based upon an opera with such historical significance, to find that it had been held and signed by two artists for whom I have deep respect.

Larson, K. M. (2012). Navigating worlds of “Trouble and woe and worse” in children’s literature: An exploration into the double text of Tony Kushner and Maurice Sendak’s Brundibar. Children’s Literature in Education, 43(1), 27-47.