Despite arduous work I feel privileged„. Anastasia Arkhipova enjoys her work in the jury of the Hans Christian Andersen Award!

It is for the second term that I am on the HCA Award jury. And I was on the juries for other contests before.  Every time it is such an arduous task – to choose the right author, the right illustrator, the one who is better than all the others.  It seems to be really impossible, the final decision can’t be indisputable! We have so many candidates from different countries, and there are no weak artists or writers among them. Each one was nominated by his or her country as the best of the best, they are already top-ranked, their status is undeniable. END_OF_DOCUMENT_TOKEN_TO_BE_REPLACED

„I have lived intensely with each artist and had their company for a while…“ – Thank you, Fanuel, for sharing your experiences as a jury member of the Hans Christian Andersen Award!

Participate as a member of the jury of the prestigious Hans Christian Andersen Award has meant a relevant experience in my professional life. Coincidentally I was at the press conference in Bologna Book Fair when jurors´s names were announced. I felt great joy when I heard my name, especially because being part of this jury implies a recognition of the professional involvement and the critical work that each member has developed over many years. END_OF_DOCUMENT_TOKEN_TO_BE_REPLACED

The whole Award process starts almost as soon as the previous one has finished.  At the end of the ‘Andersen Year’, which is always an even year, the National Sections of IBBY are invited to submit nominations for the Jury, as well as submit the nominations of the actual candidates for the awards.  The IBBY Executive Committee selects the Jury from the nominations at its meeting in Bologna.  END_OF_DOCUMENT_TOKEN_TO_BE_REPLACED

The Hans Christian Andersen Award, the most prestigious award in literature and books for children, has an international jury whose members are democratically chosen in General Assembly from candidates of  IBBY National Sections. END_OF_DOCUMENT_TOKEN_TO_BE_REPLACED

„Artists make this world a better place“ – one of the statements of Ayfer Ünal, jury member of the Hans Christian Andersen Award 2014. Thank you, Dear Ayfer, for this personal insight into the work as a jury member!

I served for the Hans Christian Andersen Jury for two terms, both in 2012 and in 2014. It is immense work as well as immense pleasure! END_OF_DOCUMENT_TOKEN_TO_BE_REPLACED

Susan a professor of English at Central Michigan University, where among the courses she teaches are those in international and multicultural literature for children and young adults. Her experience in the field of children’s books includes a decade working for the Lerner Publishing Group in both the marketing and editorial departments and eleven years as editor of The Five Owls, a now-defunct journal about children’s books. Susan’s interest in international children’s literature began with trips to the Frankfurt and Bologna Book Fairs while she was at Lerner and led her to write a dissertation on international picture books.

Since 1986, when she attended her first IBBY World Congress in Japan, Susan has been an active member the United States Board on Books for Young People (USBBY). She has served as USBBY’s president and is the author of The World through Children’s Books (Scarecrow, 2002), one of the books in the Bridges to Understanding series sponsored by USBBY. A long time member of the American Library Association, Susan has served on several committees, including selection committees for the Caldecott and Batchelder awards.

Sangwook studied Literature Education at Seoul National University and in 1995 gained his Ed.D. Since 1997 he has worked as a professor at the Chuncheon National University of Education, where he teaches courses on children’s literature, picture books and the history of Korean children’s literature. In 2002/3 he was a visiting scholar at the Teachers’ College of Colombia University, NY.

His publications have included many books about children’s literature, theory and the practice of teaching, and in particular about picture books.  He has also published monographs for various journals.  Between 2004 and 2011 Sangwook was a representative for the group Citizen Acts for the Genuine Reading Culture.  From 2007 until 2012 he was the president of the Korean Association of Literature form Children and Young Adults and is currently the chairman of the coordination committee for the monthly magazine Eolini-wa-Munhak (Children and Literature).

Sahar earned her B.A. in Visual Communication and Graphic Design from the Azad University in Tehran. She joined the Children’s Book Council of Iran (CBC – National section of IBBY) in 1997, and since then has worked and undertaken research the field of children’s literature.  In 2000 she began working as a graphic designer and research assistant at the Institute for Research on the History of Children’s Literature in Iran and worked on the project Pictures in Children’s Books until 2003.

From 2003 until 2007 she worked as an art and crafts tutor in the Education Department and Family Learning of the Durham County Council in the UK. In 2007 she graduated from the University of Sunderland with an MA degree in Design: Multimedia and Graphics. Since her return to Iran she has been working as an independent researcher, a freelance graphic designer and a critic of children’s book literature and illustration. She has written and translated several reviews and essays both in national and international journals. She was selected for the Hans Christian Andersen Award Jury in 2012. Sahar is currently a member of the CBC’s executive committee and acts as the international liaison with IBBY.

Sabine studied German Philology and Catholic Theology and in Berlin/German Media Science at the Karl-Franzens-University in Graz. For seven years she was part of the research work about Austrian Literature in National Socialism at the Institute of German Philology in the Karl-Franzens-University in Graz. After several years in cultural administration she became a secondary-school teacher. Currently she is professor at the University of Teacher Education Styria in Graz. Her main interest is in Children’s Literature, media and literacy.

With others she founded the Austrian Research Society for Children’s and Youth Literature (ÖGfKJLF), is in the board of the Austrian Literacy Association (ALA) and Liaison Officer for IBBY Austria. Sabine has also worked as an editor and is asked to speak on children’s literature, media and education.  She served on the 2012 Hans Christian Andersen Jury. 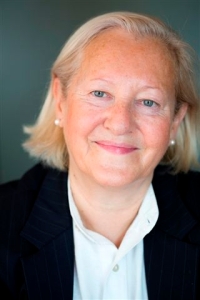 After training as a teacher and editor, María Jesús worked at Ediciones SM for twenty years, starting as Foreign Rights Manager, and then as the Editorial Manager of the Department of Children and Young Adults for fifteen years. She also worked as the Editorial Manager of Alfaguara Infantil y Juvenil and Altea (Santillana).  After a time as a professional consultant for publishing firms, she joined the Foundation SM and is currently the coordinator of its Reading Programmes for Spain and Latin America.

María Jesús was an elected member of the IBBY Executive Committee from 1996 until 2000.  Between 2009 and 2011 she served as President of the Spanish Section of IBBY and was the Chair of the 32nd IBBY Congress in Santiago de Compostela in 2010.  She was a member of the Jury for the Hans Christian Andersen Award for the 2008 and 2010 awards. María Jesús was elected President of the 2012 and 2014 Hans Christian Andersen Award Jury.