Out of No Man’s Land”) toured through Costa Rica in Central America. The exhibits were shown in schools and universities as part of a cultural project that was organized by Fundación Leer / IBBY Costa Rica. The project aimed at encouraging children and young adults to actively participate at creating cultural life, and additionally at strengthening the capacities of teachers and librarians to facilitate this process.

Hazel Hernández Astorga, head of Fundación Leer / IBBY Costa Rica and organizer of the project, describes the incentive and aims of the project as follows:

“In Costa Rica, there are few spaces for participation for children and adolescents, many are unaware of key information about their cultural human rights and how they can enhance their personal and community development. Within the traditional visions of culture, they have been considered passive consumers of cultural products and not as subjects of cultural rights, with relevant roles in the production, transmission and transformation of culture. At the same time, professional sectors that can contribute to a greater strengthening of community culture have few tools to be able to play an active role that promotes interest in cultural development, legitimate participation and recognition of active citizenship facing cultural human rights.

The objectives and lines of action of this project seek to contribute to the theme of democracy and effective participation of cultural life by placing two strategic sectors of the population at the center of the project intervention.

The aim of the project is to contribute to the strengthening of the school cultural life through the creation of spaces for active participation that allow the children and adolescents of the communities to recognize themselves as producers of culture.”

The exhibition was displayed at the Escuela de Bibliotecología / Instituto de México, the 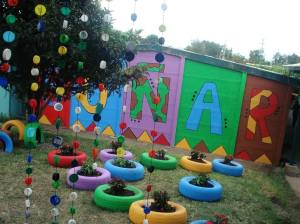 Escuela Proceso Solano Ramírez, and the Colegio Técnico de Turrialba. Moreover, it was part of the inauguration of the new study program “school libraries” at the Universidad de Costa Rica, Sede.

Nearly 1000 university, primary school and secondary school students visited the exhibition and attended the accompanying programs. Diverse workshops and cultural projects allowed the young people to express their own creativity for example by drawing artworks, creatively reshaping school grounds or making music together. In the framework of these activities, the participants were also sensitized for the importance of common rules that foster a peaceful coexistence in everyday life. Hazel emphasizes that the activities in the selected schools shall inspire other schools to join the project, “A space open to new proposals, a space for discussion, respect and affection …“. 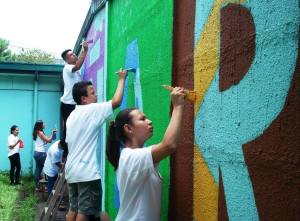 “Caminos para salir de la tierra de nadie” was curated by the International Youth Library and focuses on the beginning years of the library, and its founder’s (Jella Lepman) efforts to rebuild a democratic society and build bridges between cultures by international children’s books in post-war Germany.