At the International Youth Library, it is one of my tasks to keep track of all the children’s and young adult books published in the English-speaking world. Therefore, the famous Frank Zappa quote, “So many books, so little time“, is my constant motto. However, never has this quote been more relevant than on my last visit to Bologna. On February 13th and 14th, I had the honour to join Fanuel Hanán Diaz, children’s literature expert from Venezuela, American graphic designer Dinah Fried, and Italian journalist Stefano Salis as a member of the international jury for this year’s Bologna Ragazzi Award. What a pleasure! 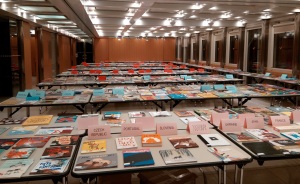 I had suspected, of course, that selecting just one winner and a couple of honour books for each of the four Bologna Ragazzi Award categories – Fiction, Non-Fiction, Opera Prima, and New Horizons – might not be an easy task. Yet exactly how challenging it would be only dawned on me when I entered the large room where all the books were displayed. A truly daunting sight….

However, Roberta Chinni, project manager of the Bologna Children’s Book Fair, and her team had prepared everything meticulously to ensure that our work during the two days would be as effective and agreeable as possible: 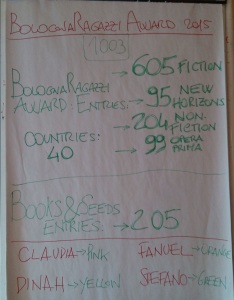 All the books had already been sorted into the four categories, grouped according to countries, and spread out on the tables with the essential information sheets inside them. The Fiction section was naturally the largest group with more than 600 books entered, followed by Non-Fiction with 204 books, Opera Prima with 99 books, and another 95 books entered for the New Horizon category. Thus, our task was to assess a total of 1003 books.

After a warm welcome and a quick general introduction, we four jury members took a deep breath, approached the long rows of tables, and set to work – each of us in a different corner. 1003 books from 40 different countries in just two days – this may sound crazy. But the Bologna Ragazzi Award is a prize that “intends to give notice to the best books in terms of graphic and editorial design” and so its focus is on aspects such as illustrations, layout, type, format, and cover design, etc. The overall aim is to evaluate the book as a whole. Nevertheless, with such a large number of well-made, interestingly illustrated, beautifully designed titles, time was definitely a pressing matter. After about nine hours of be nding over covers, peering at pages, and admiring images, we finally called it a day at 8 pm on Friday night. The first round was over.

The second day started with an extra treat – a quick visit to the pasticceria “La Caramella” to sample some delicious creations by award-winning pastry chef Gino Fabbri, who was one of the jury members for the “Books and Seeds” section. This special category, for which publishers had sent in an additional 205 books, was created with the 2015 World Expo in Milan in mind. Four Italian nutrition and food experts sifted through the book piles to create a shortlist of the most promising titles.

At 10 o’clock on Saturday morning, both juries gathered for a thorough discussion of this shortlist. With eight jury members, I feared that “too many cooks [would] spoil the broth” or rather make it hard to come to a final decision. No such thing! One particular title immediately won us all over: “Frigo Vide” (Empty Fridge) by Gaëtan Dorémus (Seuille Jeuness, Paris, France, 2009).

The discussion continued, and soon we had picked the five “Books & Seeds” honour books. http://www.bookfair.bolognafiere.it/en/booksseeds/2015-winners/3820.html First task accomplished… and the Ragazzi Award Jury quickly went back to their “own” piles of books.

Our next assignment was to revisit the books we had selected the day before and decide on the winners and honour books in each category – carefully weighing the pros and cons for each contender. Original perspective, stunning illustrations, fabulous colour palette, perfect balance of text and images, harmonious design and layout… These were just some of the aspects that struck chord with us and many books could boast at least one of them. In the end, however, we had to come to a decision and happily agreed on our winners:

Handling all these wonderful books, we were certainly tempted to award at least ten special mentions in some of the categories, but were kindly asked to narrow it down to not more than four or five. Which we did in the end. http://www.bookfair.bolognafiere.it/en/bologna-ragazzi-award/winners-2015/2225.html

All that remained after this was to write the jury statements for all the winners and honour books. Another three hours and everything was finished.

Personally, I would have loved to spend another one or two days going over the books again, savouring the many high-quality treasures from around the world and awarding another pile of interesting, innovative, and astounding books. Yet naturally, the number of awards and honour books was limited, and so was my time in Bologna. I had to pack my suitcase and fly back to Munich.

In the end, it all comes down to the same problem again: So many books, so little time!

I hope to see you all in Bologna! 🙂 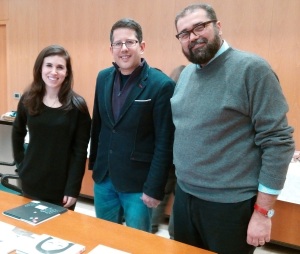