“If the war really is over,’ I said, ‘if one is to believe in peaceful coexistence, the first messengers of that peace will be these children’s books. Help me with this experiment. I promise you, you’ll never regret it.’”– Jella Lepman, A Bridge of Children’s Books. p.34.

This memory of Jella Lepman’s points to the philosophy which survives in one of her major legacies: the Internationale Jugendbibliothek / International Youth Library in Munich, Germany. Lepman’s vision for the library was borne, at least in part, from her experience of danger and displacement due to war. The current exhibition curated by the library Guten Tag, lieber Feind! Bilderbücher für Frieden und Menschlichkeit / Hello, dear enemy! Picture Books for Peace and Humanity takes up these issues, and brings together a collection of picture books which explore conflict, community, and the importance of empathy for others.

There are imaginary stories of true wars, and true stories of imaginary wars. Classics of conflict literature from around the world, such as Munro Leaf’s The Story of Ferdinand or Dr. Seuss’s The Butter Battle Book sit alongside more recent works such as David McKee’s The Conquerors and Davide Cali and Serge Bloch’s The Enemy. 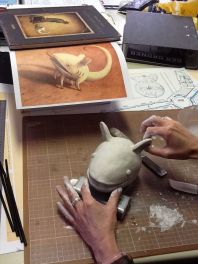 As a visitor to the library from far away, I had my own moment of simultaneous recognition and displacement when I saw the familiar artwork of Shaun Tan and Armin Greder framed by a language other than English. It makes sense that their stories of exile and migration – The Arrival and The Island should be in this exhibition, as they explore respectively the positive possibilities of forging new communities in new places, and the negative consequences of refusing to empathise with anyone different from ourselves. Here though, these Australian picture books take on new meanings and speak in new tongues. Seeing them through a ‘foreign’ eye allowed me to know these books in a new way, and to think of the picture books themselves as migrants: travelling far from Australia to become part of new communities of readers.

But, if I had to single out one book to stand in for the exhibition as a whole, it would be Gilles Baum and Thierry Dedieu’s Le baron bleu / The Blue Baron (2014). This is a master work of productive revision and memorialisation: a century after the beginning of World War I, a history of airborne warfare embodied in the notorious Red Baron becomes a fable about the power of reading as the Blue Baron drops books and letters on the enemy and his own soldiers.

When he is drawn into national service, the Blue Baron empties the shelves of his personal library to use as weapons against the enemy. When his last ‘big’ book – War and Peace – distracts his enemy from fighting, the Baron realises that the books are most valuable as ‘weapons’ for their contents rather than their size. And so, he drops novels and philosophy on the front lines to distract both sides from fighting. Soon, he is strategically dropping the beginning of a novel on his own troops and its conclusion on the enemy so that the two sides must meet and share in order to have the whole story. His true genius is to drop the letters from soldiers’ families in their enemies camp: the sharing of emotion and empathy which this tactic engenders brings an end to the war.

‘Where the Baron sows poems, he grows poets.’

Le baron bleu, like the exhibition as a whole, speaks to the power of intercultural and shared reading, especially but not exclusively in times of war. What better monument to the philosophy of Jella Lepman could we hope to find at the International Youth Library?